Bignami relies on a network of professionals of the sector to distribute at best its vast range of products offered. By getting in touch with a dealer selected by us you have the following assurance: security, competence and professionalism. Bignami selects only the best products to be distributed only via the best dealers.

The prices published on the web site have the purpose to guide the user through the large-scale of products offered by Bignami. Pricing is Suggested Retail Price VAT included. Bignami S.P.A. disclaims responsibility for publication errors. Please get in touch with your dealer for more precise information on actual selling prices. 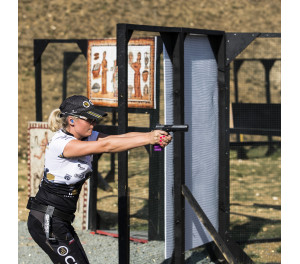 Practical Shooting, an exciting discipline Practical shooting is, by now, a sport that counts thousands of athletes. It all started in the eighties, with only pistol shooting. It evolved all the way up to today's sport, which sees a vast difference of categories which include handgun, rifle, shotgun, and PCC (Pistol Caliber Carbine). Diligentia, Vis, Celeritas is the traditional motto of practical shooting as it includes all the different elements that make it so special and unique. Diligentia, means precision, Vis, implies the strenght of the weapons used and celeritas is the speed of the executionn of the exercises which characterize and compone the various competitions. Practical shooting requires being able to manage a gun with precision and, at the maximum execution speed, all of this in total safety. The final result is the correlation between the score on the practical and the time used to complete the exercise. It is on this particular correlation that the shooter will have to make quick decisions which will define his performance. The targets can be paper or metal plates, fixed or in movement. They are placed at different distances and have to be shot in different ways, such as in a standing or kneeling position, in movement, standing, with one hand, behing a barricade etc... The exercises are never the same, and neither is the procedure to execute a course. On the contrary, there is often a personal approach to the exercise which determines the advantage of one shooter over the other competitors. It is safe to say that this sport will never annoy you. For everyone and for all tastes Each specialty in practical shooting has different divisions, which differ one another based on the characteristics that the gun has to have. As far as handguns, we have the Production division, the most practiced one, in which you compete with a factory gun more or less. Moreover we have the Open division, the Formula 1, in which every type of modification is allowed, and the firearms resemble sci-fi movie guns due to the use of compensator, magwells, pads, optics, etc... The same principle also applies to rifles, with the different divisions which are Open, Modified, and Standard for semiauto shotguns. In addition, we have the Standard Manual division for bolt action rifles. Moreover, there are Semiauto o Manual Action Standard and Open for rifles and PCC rifles. This means that literally everyone, even with a low budget and weapons that are strictly factory set, could participate and set foot on the podium at the end of the race. The vast Bignami catalog, allows both the beginner and professional shooter to find everything they could ever need to compete and win. Going through our handguns catalog, you will notice that there are the guns used by International champions such as the CZ Shadow 2 for Production division, the very elaborate STP for the Open, Standard, and classic division. It's possible to choose guns that are competition ready such as the Savage MSR-15 Competition rifle in caliber .223 Remington, or the Mossberg 940 & 930 JM Pro special edition as semiauto shotguns. In case you would prefer building your own competition handgun, rifle, or shotgun, you'll be able to do it thanks to the Toni System custom components, which offer a wide variety of colors and parts. Something also worth mentioning is all the holsters, belts, magazine holders, bags, and backpacks that we offer from the well-known brands Safariland and Blackhawk. Reloading material for ammunition, from the presses and components of RCBS and Hornady all the way to Hornady, H&N and Federal’s projectiles, CCI and Federal’s primers, Hornady, Nosler, Federal and Starline’s cartridges, to conclude with the Reload Swiss powder.